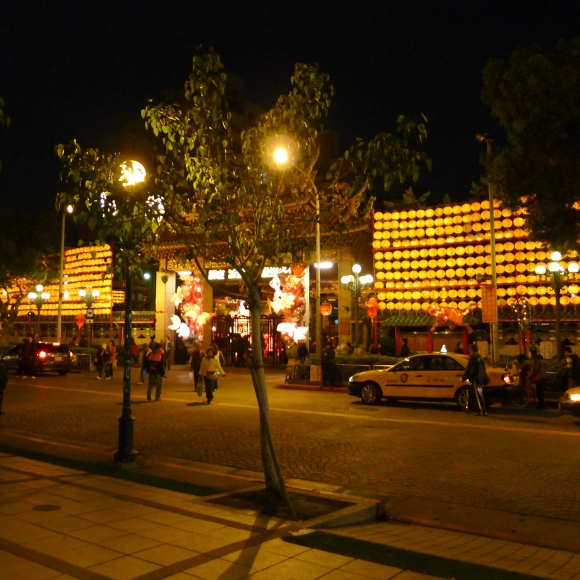 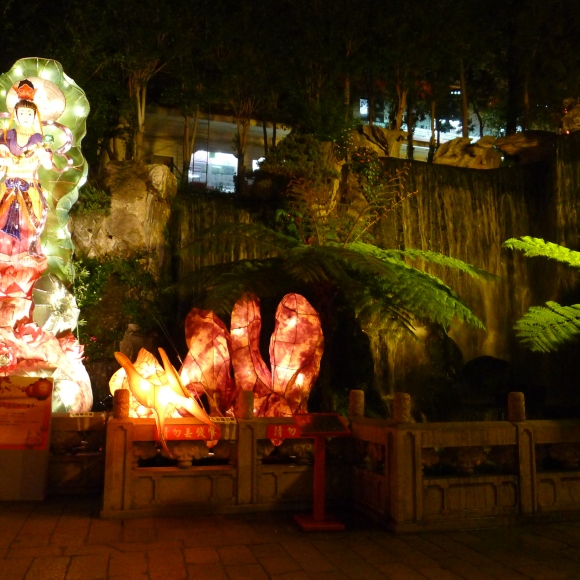 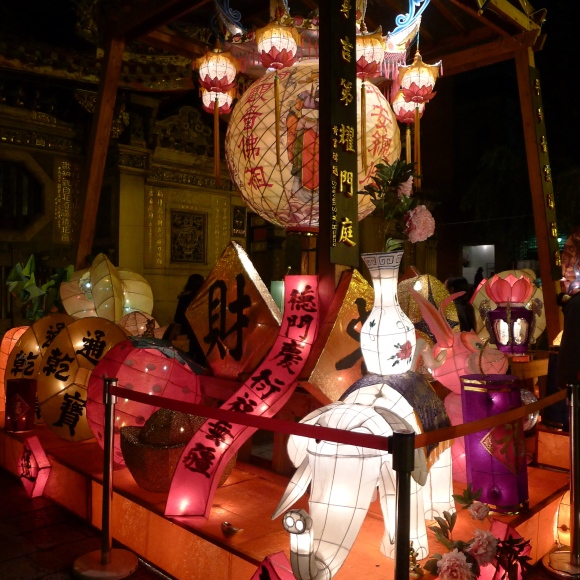 Outer courtyard, another view of waterfall and lamps 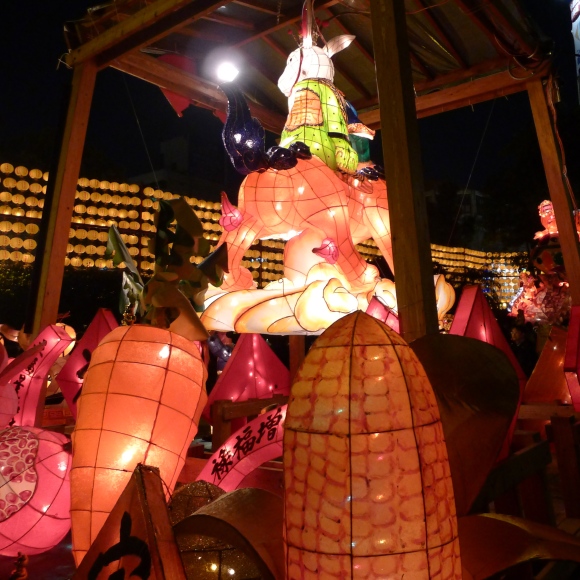 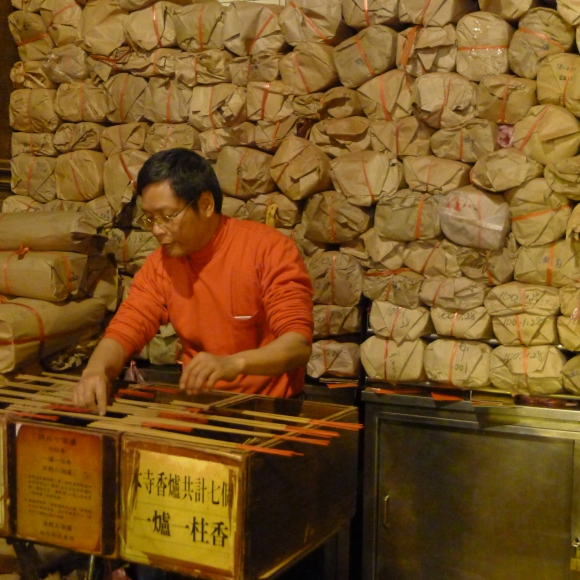 Side hallway of second courtyard

Offerings on a table

Lighted figure next to incense pot 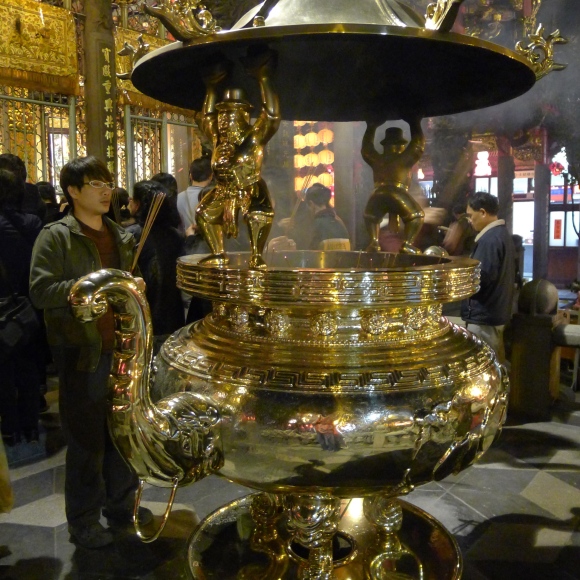 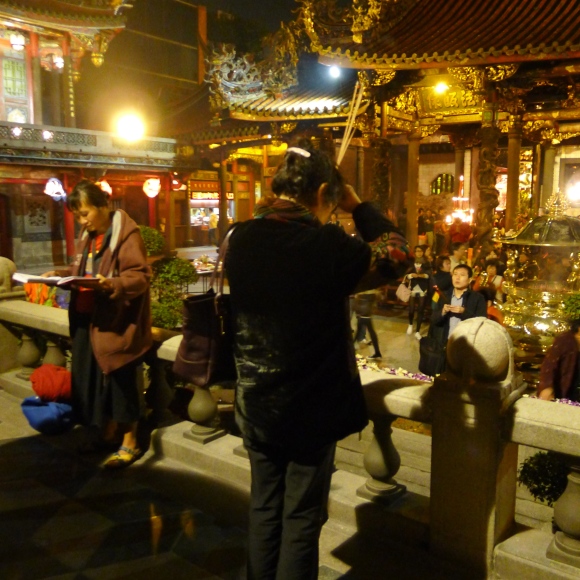 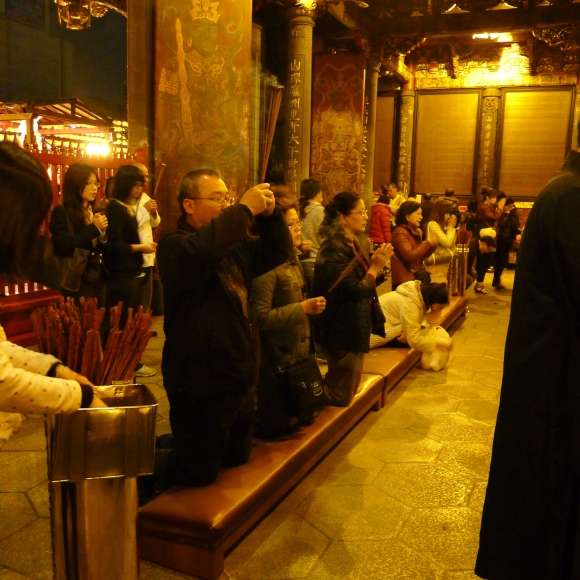 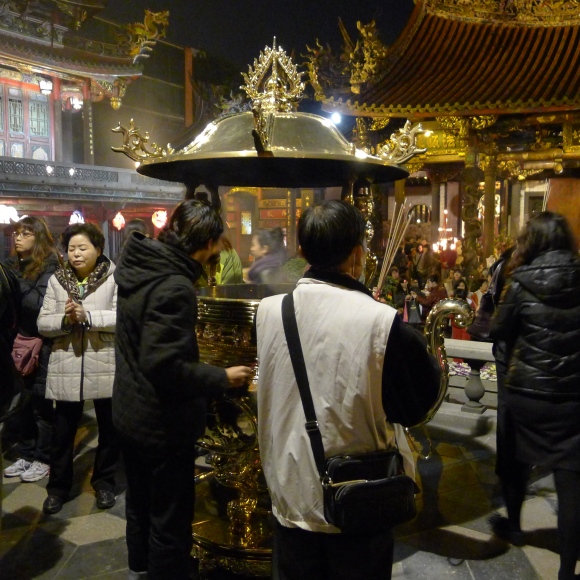 Woman lighting candles atop a ladder

Lighted lamps on the wall of courtyard

In February of 2011, I visited Long Shan Temple in Taipei. It was built in 1738 by settlers from Fujian, China and is Taipei’s oldest temple.  As with many other temples in Taiwan, you can come here to worship Buddhist and Taoist figures, as well as various folk gods.  There are more than 165 gods or figures enshrined inside.  (In Chinese culture in general, there is no conflict with worshipping multiple gods and revered figures at once.)  Although it is the oldest temple in Taipei, when I visited, the temple also combined a slightly modern aesthetic with lighted sculptures or lamps to greet both visitors and tourists.  It has survived earthquakes, bombings and many fires throughout its history, raising its stature as a a historical site and place of worship.

When you enter, you are immediately greeted with the smell of incense, curling everywhere around you.  Even though there are many people and tourists, a sense of serenity pervades.  Typically, you take several strands of incense and bow a few times with the incense sticks in both hands as you wish for the well-being of yourself and others.  You can do this as many times as you wish.  There are beautiful, large iron pots where you can place the incense sticks after your tribute or prayer.   The temple also has many Chinese poems, carved into wood.  People kneel and pray or read from various texts and scriptures.  A multitude of flowers and offerings to gods and ancestors sit atop tables and are placed in the courtyards, a feast for the eyes and the senses.  Lit candles add to the aura.  The sound of uniform chanting of Buddhist scriptures coming from the inner temple resonates throughout, imbuing a sense of calm and wonderment.

There are three gates or entrances and courtyards, the inner ones lying within the outer, all ornately decorated.  The outer courtyard is the largest and has a waterfall, trees, tables and the sculpted lamps when I was there.  The second courtyard is where most people pray, either standing up or kneeling, bow with incense, read texts and make offerings.  The inner courtyard is the smallest and houses the heart of the temple, with carved ceilings painted in gold and with the main fixture being a statue of Guan Yin Buddha or the Goddess of Mercy.  This is the inner sanctum where people kneel and chant Buddhist scriptures, often dressed in dark robes.

I cannot fully describe the magic of this place, except in part with the pictures I took.  If you go to Taipei, please take the time to visit.  All are welcome, and admission is free.  (The incense is also free, but you can feel free to buy incense there or make a donation.)